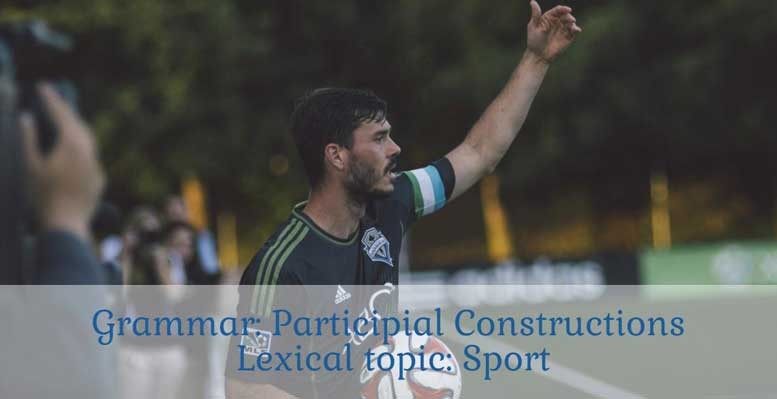 Упражнение 1. Transform the given sentences into sentences with the Participle or Participial groups where it is possible. Remember that the Participle II doesn’t usually express priority, but has mainly the passive meaning and therefore phrases like “Человек, принесший письмо” must be expressed in English by a clause.

She saw him scoring / score the goal

He was seen to set a new record

He was seen setting a new record

The match being over, the players went home

She watched the game very attentively, with her eyes fixed on the sport ground.

Упражнение 7. It is well known that sport does people a lot of good – but different kinds of sport develop different skills. So make a classification of skills and kinds of sport which train them. Use the pattern:

Упражнение 7. Imagine that you are a commentator of sport competitions. You are very responsible and you want not only to describe everything in details but to give all the possible information about the sportsmen taking part in the competitions. But the broadcast time is expensive and you have to be precise. The following pattern may help you: “The sportsmen kicking the ball is …” or “training hard he achieved outstanding results …” and so on.

Упражнение 8. Describe the rules of any sport game. Do not forget that the description must be exact and precise, but detailed for everybody to understand it. You may use the pattern: “A man having a ball must … “

Упражнение 9. You are a member of the Committee, which is to decide what kinds of sport should be included in the Olympic Games. You prepare a report where you say what games, from your point of view should or should not be included. You must be precise and detailed, so you decide to use the Participle and Participial Constructions where possible.

Упражнение 10. You are an architect whose task is to make а project of a sport complex.  Tomorrow you are to give the report about what you have already done. The Committee will be very strict and serious, so you want to sound business-like and scientific. You think that the use of the Participial Constructions will help you to produce the desired impression. You describe each item of the sport complex taking into consideration its function, advantages and disadvantages.