Упражнение 1.  Read the text. Find all the geographical names in bold on the first map (Map 1) and complete your own map (Map 2).

The United States of America is also called the USA, US, United States or sometimes America. The USA is in the central part of North America. It borders on Canada and Mexico. It is washed by the Atlantic Ocean, by the Pacific Ocean and by the Gulf of Mexico. The capital of the USA is Washington.

The territory of the USA consists of three separate parts

The area of the country is about 9,400,000 km2. Its population is about 324 million people. The US is the 4th largest country in the world by land area and 3rd by population.

The USA is a country of mountains, valleys and deserts. The highest mountains are the Appalachian Mountains, the Cordilleras, the Rocky Mountains and the Sierra Nevada Mountains in California. The tallest mountain the US is Mt McKinley, located in the state of Alaska

The Great Lakes are in the north-east of the country. They are Lake Ontario, Lake Huron, Lake Erie, Lake Superior, Lake Michigan. The largest rivers of the USA are the Mississippi and the Missouri.

The most populated city in the US is New York City, followed by Los Angeles and Chicago. 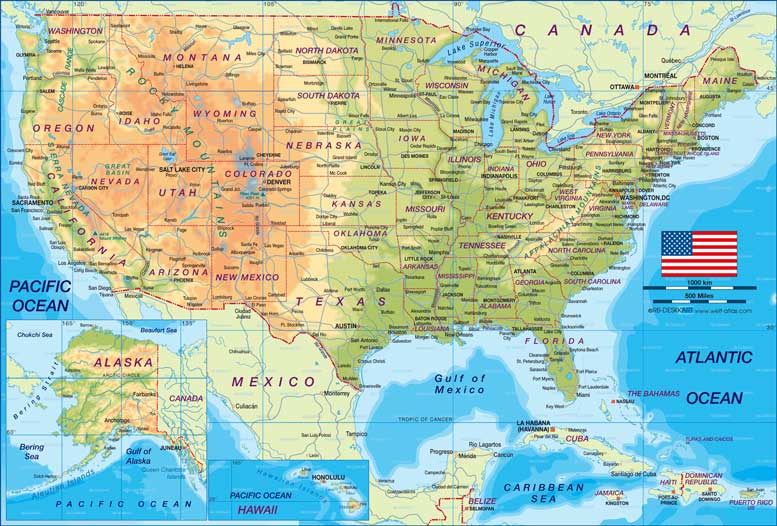 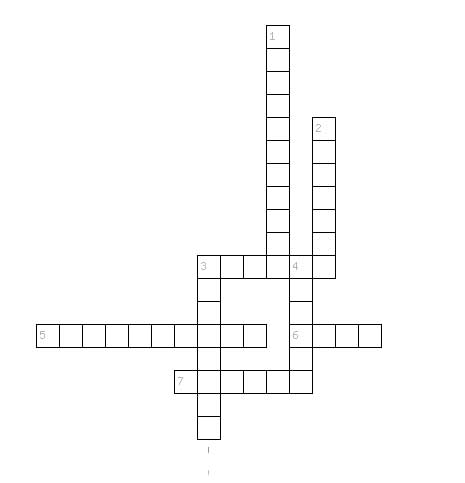 1/ The longest river in the USA.

2/ One of the largest city in the USA.

3/ The USA borders on it in the South.

4/ The USA borders on it in the North.

3/ The highest mountain in the USA.

7/ The most northern state of the USA.

THE USA. States and symbols.

Упражнение 4. Read the text. Find the 5 largest states on MAP 1. What are their capital cities?

The USA is a federal republic. It consists of 50 states.  The five biggest states are: Alaska, Texas, California, Montana and New Mexico. The capital city – Washington – is situated in a special district — the District of Columbia.

One of the national symbols of the country is the flag. It is also called STARS AND STRIPES. There are 50 stars on the flag – one for each state. There are also 13 stripes.  The 13 stripes represent the 13 original colonies of the US.

The national bird of the USA is the Bald Eagle. The National mammal is the bison – just like in Belarus. The national flower is the rose like in England, and the national tree is an oak. 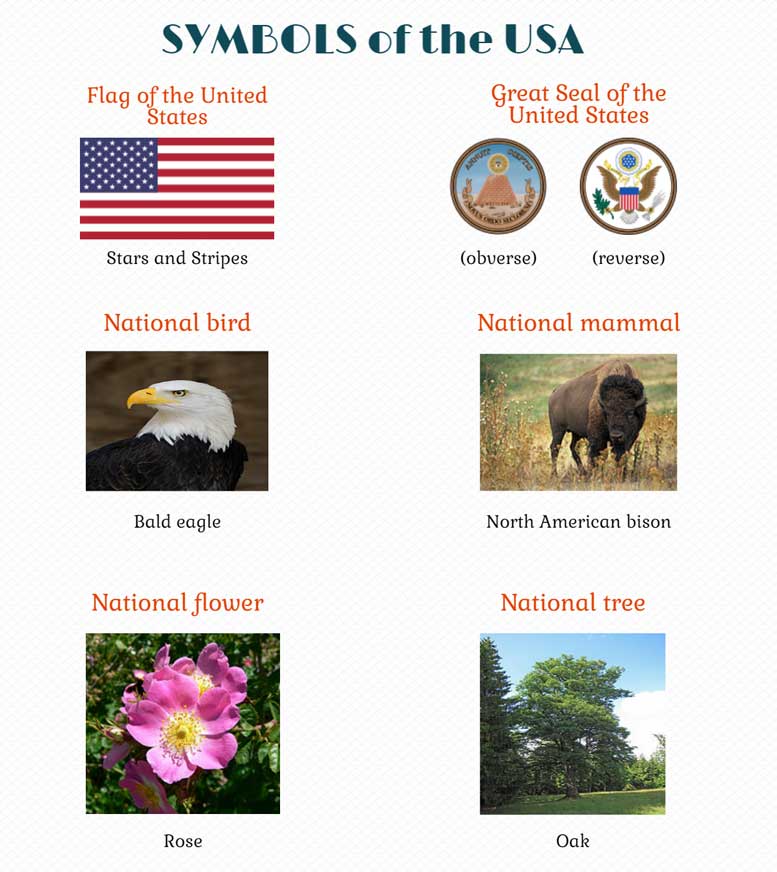 Упражнение 6. Read the passage and complete the table. The first is done for you.

HOLIDAYS IN THE USA

American holidays are days off from work just like ours. The main holidays in the USA are:

People stay awake until after midnight on December 31st. They have parties, go to night clubs, meet their friends. Many people greet the New Year in.

Valentine's Day is not a national holiday. Banks and offices do not close, but many people celebrate Valentine's Day. They exchange cards and spend their time together with the loved ones.

George Washington's Birthday is not a national holiday. It's a great day for shoppers. Many shops have sales marked by unusual bargains. People usually go shopping on this day.

People celebrate Easter on the first Sunday after the first full moon between March, 22, and April, 25. Pupils usually have spring vacation at this time. Easter is a church holiday, and many people go to churches on this day. People give each other eggs.

Memorial Day is a national holiday. Schools, banks and offices close for the day. On that day, Americans honor the soldiers who gave their lives in past wars. Schools, clubs and churches decorate the cemeteries. They put up the flags on the graves of the army, navy and airmen.

Independence Day is a national public holiday. On this day, in 1776, America signed the Declaration of Independence.  People have picnics and parties and meet their friends on this day.

On this day Americans just have a nice holiday. It is not a national holiday.  Children dress up as ghosts and witches and go out into the streets to beg. They go from house to house and say: «Trick or treat!».

In the USA Thanksgiving Day is a national holiday. All members of the family gather at the house of their parents. The family has a large traditional dinner, usually with turkey, cranberry sauce and pumpkin pie.

It is usually a one-day official holiday. Christmas is a family holiday. Schools and colleges close between Christmas and New-Year's Day. People stay at home and spend the time with their families.

Упражнение 7. Do you think this statements are true or false?  Correct the false statements.